The Snow Plow Show is a comedy podcast featuring prank calls, phone related news stories, updates about the Phone Losers of America, weird music, and voicemails from listeners.  It’s hosted by Arbie, who sometimes goes by Roy or Brad or RedBoxChiliPepper, or about a billion other names when making weird phone calls to people.  Shows are sometimes broadcast live, but most of them are prerecorded and released as a podcast.

The Snow Plow Show started in 2012 and began as a video-based show on YouTube.  After about 3 episodes, Arbie quit making them because putting together videos for every show was just way too much work.  About 6 months later, in 2013, he turned it into an audio-only show that happened at least once per week.  Today the format remains pretty much the same.

From 2012 to 2021, most of the shows were recorded in a hot stuffy 3rd floor attic room in Albany, Oregon, commonly referred to as The Situation Room. By the summer of 2021, the studio had moved to Portland, Oregon and is now called the Prank Call Call Center. Here’s a picture of what it’s looking like in November of 2021. 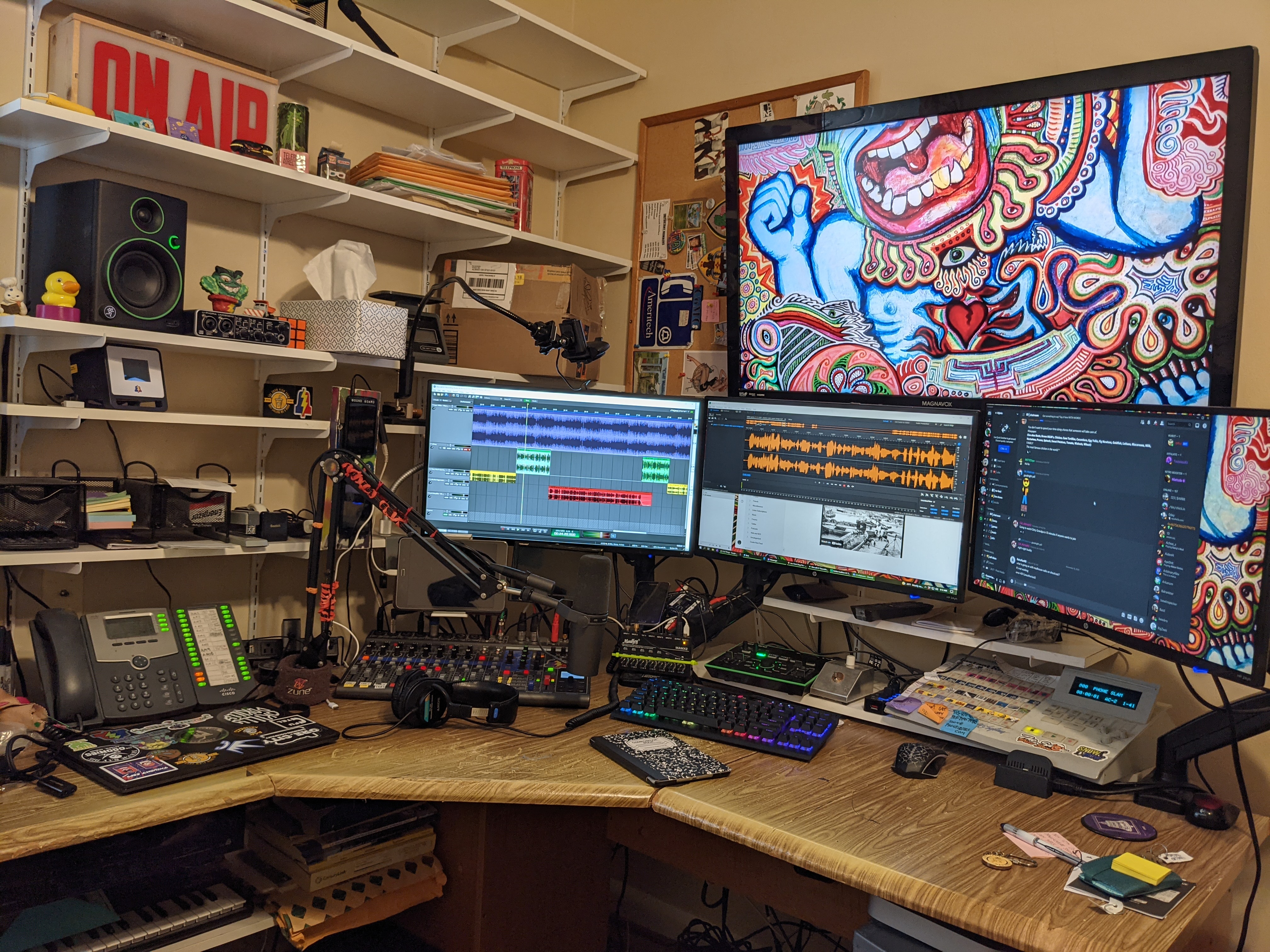 The studio setup consists of a standard desktop computer with four screens, a Zoom L-12 mixer, a Roland VT-3 for voice effects (like the Carol voice),  an Instant Replay 360 for sound effects, an old cell phone for background music, and a SIP phone client for making phone calls with. There’s other stuff involved that you can read about on PLA’s FAQ page, which includes yearly video tours of the studio.

Q: Why is your show called The Snow Plow Show?

A: The name comes from an old comic created by Toothpaste For Dinner. In the comic, a flyer reads “FOR SALE: Snow plow. Should rhyme, but doesn’t.” That comic inspired us to call people on Craigslist selling snow plows just to demand answers to why the words don’t rhyme. And then later inspired me to name this show The Snow Plow Show, because that way I could make the show about anything I wanted, not just prank calls. That plan didn’t work out, because The Snow Plow Show is nothing but prank calls.

Q: Was this show really raided by the FBI?

A: Yes it was. In November 2016 a team of FBI agents showed up at The Situation Room in Albany and took most of the computers, hard drives, memory cards, and other various things throughout the house. The reason was for accessing Safeway’s computers without authorization, which I did to create episodes 256 and 257 earlier in the year. In the end I was sentenced to 5 years of probation and had to pay restitution, and most of my equipment was returned. More details about the entire incident can be found in episode 21 of World of Prank Calls and episode 318 of The Snow Plow Show. And I think I recapped everything in a Hobosode once, but I can’t remember which one.

A few other things…

I started updating this page on 11-13-2021 because of this post on Reddit. This page still needs some work. If you have suggestions on anything to put on this page, leave a comment below. Here are a few other links.

More frequently asked questions can be found on phonelosers.com

A really outdated history of the PLA can also be found on that site.

As well as this FAQ that explains what cactus means and how to spoof your caller ID.

And this old travel log of mine kind of ties into it all.